“…the SPX again enters the week facing potential resistance, even after other resistance levels were taken out. For example, the index comes into the holiday-shortened trading week in the vicinity of the major trendline that has connected all major lower highs since its peak in early January 2022. This trendline begins the week at 3,980 and will be sitting at 3,970 on Friday… the round 4,000-millenium mark, which was the close prior to a break below a trendline connecting the October and November lows, could act as resistance. Just above lies 4,020, which is the SPX’s close on the day prior to the December rate hike, and the site of its November high.”

“…even if the SPX recovers from this monthly close below the 36-month moving average, remember the trendline that has connected all major lower highs in 2022 as being a point of long-term resistance. The trendline comes into the new year at 4,009 and will be at 3,940 at the end of this month.”

As I discussed last week, the index neared major resistance levels. Those potential points of resistance varied from the trendline connecting all major highs since the January 2022 peak, to the psychological and round 4,000-millenium level (which is also its close prior to a  break below a trendline connecting the October through early-December lows).

Despite the weekly decline, I see the good news as two-fold from a technical perspective. First, the important 3,900 century mark held the lows. This has been an important level for months, marking pivots after both pullbacks and rallies, with crosses above and below signaling short-term advances and declines, respectively.

Moreover, the SPX quickly rallied back above its Wednesday close, following a gap lower on Thursday that could be viewed as a bearish “island reversal.” For those unfamiliar with the pattern, it is formed when a gap higher is followed a few days later by a gap lower, with the lows during the trading days in between those gaps sitting above the high prior to the gap higher. Last year, this pattern signaled immediate bearish behavior for the SPX.

But in those instances, the SPX did not immediately fill the gap lower, as it did in Friday’s trading, when it rallied back to the Wednesday close that preceded the gap lower. Unlike in 2022, Friday’s recovery could be signaling that sellers are not pulling the trigger as quickly as last year, with the SPX closing the week above not only Wednesday’s pre-gap close at 3,929, but also near that trendline that has marked major peaks since the January 2022 record high.

Looking ahead, the trendline that has connected all major highs since the January 2022 peak comes into the week at 3,970 and ends the week at 3,955. The important 4,000-4,020 zone lingers just above this trendline as potential resistance, should a breakout occurs. Meanwhile, if a move below 3,900 happens, the area between 3,865 and 3,885 is a potential level of support from a trendline connecting higher lows since October.

The 36-month, or three-year moving average, which I have discussed in previous commentaries as having historical importance, is currently at 3,877. On that note, the one-year trendline is sitting at 4,030, and marked the August peak. 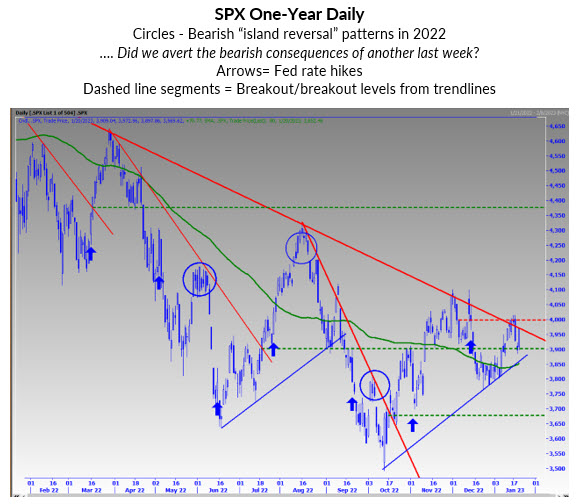 “The latest sign that sentiment has turned emphatically against US stocks comes from Bank of America Corp.’s monthly survey of global fund managers. Remarkably, the proportion of global asset allocators who say they are overweight in US equities has dropped almost to its lowest on record. The only month when they were even more cautious was October 2005 in the immediate aftermath of Hurricane Katrina…”.”

In last week’s commentary, I noted that short-term equity option buyers reached an unprecedented extreme in pessimism since we have been tracking this group. Per the excerpt above, global fund managers are currently more negative on the U.S. market than they have been in nearly 18 years.

Per the technical discussion above, the market has work to do to further pressure bears and/or move investors off the sidelines. The sentiment backdrop leans bullish, as extremes in pessimism like we have witnessed the past few weeks are necessary for a meaningful trough. But the implication of this negativity becomes less useful if the SPX breaks back below support levels discussed. 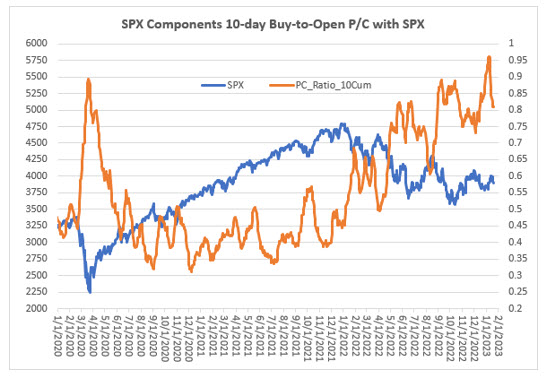 Todd Salamone is the Senior V.P. of Research at Schaeffer’s Investment Research.