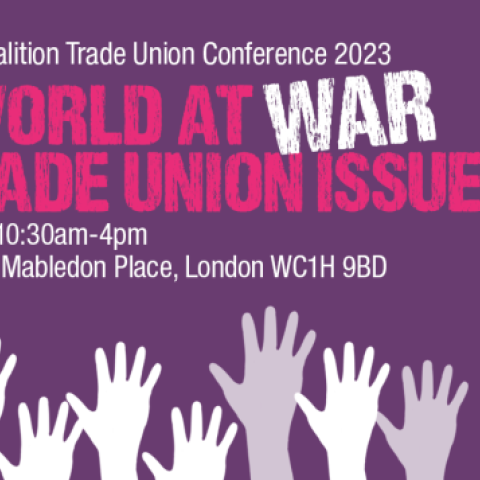 I only made the second half of the Stop the War Coalition (STWC) trade union conference on 21 January, but I think I got a pretty good sense of the event’s politics. It was broadly what I expected.

Stop the War makes a great play of its anti-imperialism: but it won’t back Ukraine against Russia’s brutal imperialist war.

There were maybe 150 people in the closing plenary. Mostly an older crowd; but I did get more of a sense of some actual delegates from union organisations than at the Institute of Employment Rights conference in the same venue (the National Education Union’s headquarters) in December.

Most of the speeches and discussion in the afternoon session I attended focused on how to oppose and reverse the terrible, spend-more-on-war policy passed at the 2022 TUC Congress (at the behest of the GMB); and issues to do with conversation / diversification and trade unionism. That is certainly a fight to take forward.

The closing session is where they got into Ukraine.

José Nivoi, a dockworker in Genoa and activist in the rank-and-file group CALP and union USB, spoke inspiringly about about strikes and protests to stop weapon shipments to Saudi Arabia, because of its war in Yemen, and Israel, because of the Palestinians. They have another struggle over Saudi weapons coming up in February.

USB, with strong Stalinist links, has a bad policy and record on Ukraine. But, contrary to what some tweeters on various sides claimed, Nivoi didn’t say anything at the conference about Ukraine or Russia. In fact blocking weapons to Ukraine is politically the opposite of blocking weapons to Saudi Arabia or Israel.

Among the British trade union speakers, there was a lot of abstract pacificism or pseudo-pacifism. Several people cited the fact that wars are almost always fought between workers on both sides, as if that alone can decide an attitude to any given conflict. Essentially justifying refusal to back Ukraine, National Education Union executive member Alex Kenny said: “Our movement has no interest in Russian working-class people being shot, or Ukrainian working-class people being shot”. Apply that to the oppression of the Palestinians or the American war in Vietnam! True and very important on a certain level, it is self-evidently not a guide to how to approach every war.

The speech from Riccardo la Torre, National Officer of the Fire Brigades Union, was a mostly admirable but very general call for working-class internationalism. He called at the end for a fight against the anti-union laws’ ban on workers striking for political – including international – demands. I couldn’t help but notice that he cited the Zelensky regime’s attacks on workers’ rights while saying nothing about the much worse repression, including of the labour movement, in Russia. Not because he or the FBU are pro-Putin; but because a certain type of “anti-war” politics gravitates to one-sided (though in this case correct) criticism of the Ukrainian government.

The 2022 conference of civil service union PCS took a very strong stance in support of Ukraine, overwhelmingly rejecting the Stop the War line, and PCS has actively supported the Ukraine Solidarity Campaign (USC). Unfortunately in his speech PCS Deputy President Martin Kavanagh avoided this contradiction by not mentioning Ukraine!

I was surprised to see ASLEF General Secretary Mick Whelan billed as a speaker – both have actively supported Ukraine and USC – but in the event there didn’t seem to be any ASLEF speaker.

Jeremy Corbyn addressed the event by video. His speech was mostly insipid pacifism. But in terms of Ukraine, while saying the Russian invasion was “wrong”, he failed even to call for Russian withdrawal. Instead he called, at some length, for negotiations. Worst of all he cited Brazilian president Lula’s soft-on-Russia attitude to Ukraine as a model, and specifically on the grounds that he is “non-partisan in terms of this war”.

He compared the conflict to the First World War and cited the supposed danger of it “spilling over into Russia”.

They kept the worst for last. STWC Convenor Lindsey German’s closing speech was more substantive than most of the rest, but utterly terrible.

Defending those in Germany who oppose their government sending tanks to the Ukrainian army, German said: “Look at German history. Lots of people are opposed to this because they remember a previous German war in Ukraine, which of course was also the start of the Holocaust.”

Yes, I was a bit startled too. She really said that.

And: “To those in the labour movement who support sending arms, I have one very simple question. Do you really think Boris Johnson, Rishi Sunak, Biden, Macron and the rest care about the people of Ukraine? Look at what they are doing to workers’ living standards in their own countries. Look at the strikes in France and here in the UK.”

It’s depressing to hear someone who has been a revolutionary socialist for half a century trot out such stupid and/or disingenuous nonsense.

When Imperial Germany sent weapons to Irish republican rebels in the First World War, it wasn’t because the Kaiser and his regime had discovered a deep affection for the Irish working class. Nor did such sentiments motivate the totalitarian rulers of the Soviet Union and China when they armed the Vietnamese forces fighting the US. Nor Indira Gandhi’s government when it armed the Bangladeshi resistance to Pakistan. Etc, etc, etc, etc…

It’s probably noteworthy that by far the worst speech at the Stop the War event (that I heard, anyway) was from a “Trotskyist”. Although clear-cut Stalinist views were not prominent, the organisation’s politics are shaped by Stalinism and reshape even the anti-Stalinist socialists who support it. SWPer Liz Wheatley, speaking on behalf of Unison’s NEC, urged people to invite arch-Stalinist Andrew Murray to speak at their union branches.

Stop the War seems to be gearing up for a new push in the unions. The serious internationalist left must be prepared with our own proposals and arguments.