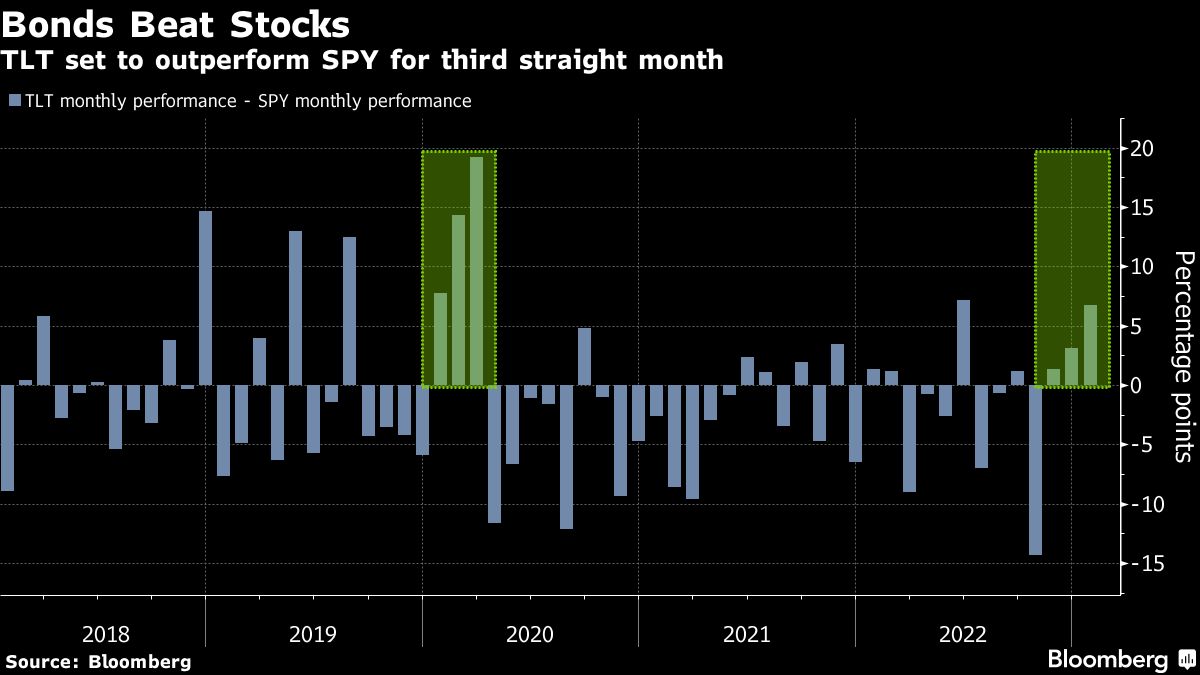 (Bloomberg) — A rousing Friday rally salvaged the week for tech investors but couldn’t undo damage done to the broader market by increasingly dour signals on the economy, many of them originating from bonds.

The 2023 surge in the S&P 500, spurred by speculation inflation is cooling, started showing cracks in the four-day week as focus shifted to prospects of an economic contraction. Anxiety that the Federal Reserve’s campaign of rate hikes has gone too far loom ever larger in the Treasury market, whose three-month trouncing of riskier assets reflects stiffening bets on a slowdown.

It’s not just fixed-income’s dour economic signal. Despite rallying to start the year, government bonds continue to represent legitimate competition to stocks in terms of valuation. A rough comparison of yields suggests the recovery in Treasury prices has room to run when viewed next to a still-expensive equity market.

None of that was enough to prevent Friday’s tech-led rebound, the biggest gain of the year for the Nasdaq Composite Index. The S&P 500 still suffered its first weekly decline of 2023, held back by losses on Wednesday and Thursday after reports on retail sales, producer prices and business equipment rekindled concern about the future of the economy.

“We believe that the S&P in particular is trading at valuations that are not appropriate with what we’re likely to see from earnings,” David Spika, president and chief investment officer of GuideStone Capital Management, said in an interview. “Bonds are still expensive, but relative to stocks, they’re much more attractively valued.”

The $32 billion iShares 20+ Year Treasury Bond exchange-traded fund (ticker TLT) has climbed 6.7% in 2023 as investors seek safety in long-dated government securities, versus a 3.5% rise for the $365 billion SPDR S&P 500 ETF Trust (SPY). That sets TLT up for a third straight month of outperformance relative to SPY, the longest winning streak since 2020.

The long-dated bond ETF just logged a 50-day advance that topped 12.5% — something that in the past has occurred only when a recession is close at hand or fears over one are high, according to Nicholas Colas, co-founder of DataTrek Research. Over the past two decades, such a surge has happened in 2008-9 and also in 2020 when downturns were around the corner; it happened from 2010-2012, in 2015 and in 2019 when investors fretted over one, he found.

“Seeing +20-years rally by this amount is therefore not a fool-proof recession indicator, but it does say markets are concerned about an economic contraction,” he wrote in a note.

Even after 2022’s historical selloff, the so-called Fed model — which plots the S&P 500’s earnings yield against the yield on 10-year Treasuries — shows that bonds are still inexpensive compared to equities, at least by recent history. Relative to its price, the S&P 500 “pays out” roughly 5.2% in earnings, versus roughly 3.5% on the benchmark US bond. That’s close to the slimmest advantage for stocks in the past decade.

“Yields can come down quite a bit further despite the fact that they’ve come down quite a bit over the last couple of days, and it is an environment in which bonds are cheap again,” JPMorgan Asset Management global market strategist Meera Pandit said on Bloomberg Television. “The attractiveness of bonds going into the rest of 2023 has surged.”

Those early returns have revived the decades-old 60/40 investing approach after the twin selloffs in stocks and bonds last year produced the worst annual loss for the strategy since 2008’s financial crisis. Portfolios divided between 60% stocks and 40% bonds are enjoying their best start to a year since 1987, according to a Bloomberg Index.

The debt market’s dominance so far stacked against still-expensive equities has some portfolio managers advocating for a twist on the classic strategy: switch the components around and put most of the assets into bonds.

“The bond market is demonstrably cheap to the stock market,” DoubleLine Capital’s Jeffrey Gundlach said on a recent webcast hosted by his company. “I recommend not a 60/40 portfolio, but more like a 40/60 portfolio, or even a 40/25/15 portfolio — bonds, stocks and then other things in the 15%.”

–With assistance from Lu Wang.