In many ways, investing is like any other discipline. To get better at it, it helps to model what experts are doing. And there aren’t many investing specialists that are more recognized than Warren Buffett. The Oracle of Omaha has an impeccable track record, having led Berkshire Hathaway (BRK.A -0.01%) (BRK.B 0.01%) for decades while generally beating the stock market. At the very least, some of Buffett’s favorite stocks are worth considering. And two in particular that stand out are Apple (AAPL -0.41%) and his very own Berkshire Hathaway. Read on to find out why.

Tech giant Apple is the largest holding in Berkshire Hathaway’s portfolio. Buffett is a fan of the company; he once said it is “probably the best business I know in the world.” What makes Apple such a fantastic company? Perhaps it is its ability to reinvent technologies. Apple’s most popular products are not the company’s brand-new creations from scratch; they are new and clever takes on existing products that managed to attract millions of customers worldwide.

But beyond Apple’s technological prowess, the company successfully built a competitive advantage, something Buffett is fond of. Apple’s brand is highly recognizable, valuable, and powerful, as evidenced by the fact that customers continued to buy the company’s expensive (and, for the most part, nonessential products) last year amid near 40-year high inflation and other economic problems. Further, the company’s ecosystem benefits from high switching costs.

For iPhone users, jumping ship to an Android device involves transferring files, an incredibly inconvenient task many choose to avoid. Some surveys have found that the iPhone has the highest loyalty rate — above 90% — of all major smartphone brands. That’s why the company has over 1 billion iPhone users worldwide.

And this massive installed base will become increasingly more important for Apple as it finds new and improved ways to monetize it. The company’s push into the fintech world looks particularly promising, at least in my view. Apple is a cash-generating machine, with a free cash flow of about $111.4 billion.

The company has the funds to pour money into new profitable ventures. Apple’s shares have dropped by 22% in the past year, partly due to supply chain and manufacturing problems. But the company’s earnings, track record, and prospects are too attractive to ignore. Buying Apple’s shares right now while they hover around their 52-week lows is a great move.

Berkshire Hathaway has been performing better than most in this market downturn. Shares are slightly in the green in the past year as of this writing. There are many reasons why this major conglomerate is an ideal stock to buy when the economy is down (or even when it isn’t). The first is that Berkshire Hathaway owns a large portfolio of businesses in various industries, granting it a solid degree of diversification.

Some of Berkshire Hathaway’s best-known subsidiaries include insurance giant Geico, battery manufacturer Duracell, and clothing specialist Fruit of the Loom. Berkshire Hathaway’s diversification allows it to handle economic shocks since it isn’t too dependent on just one or two businesses. Second, Berkshire Hathaway’s track record against the market, especially since Buffett took over in 1965, is impressive. 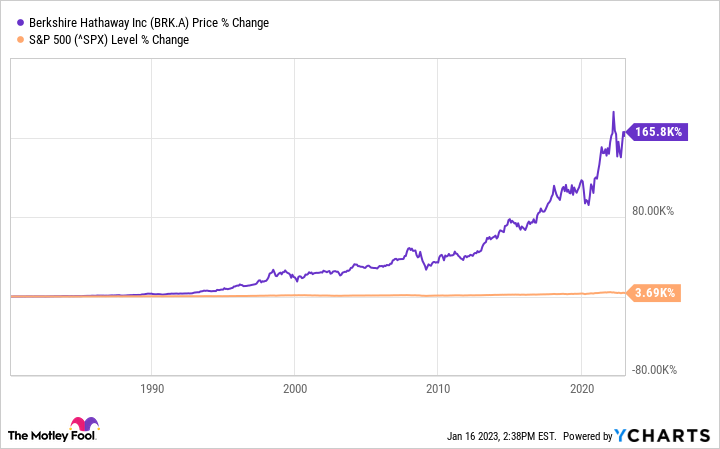 While past performance is no guarantee of future success, the company has performed that well because of Buffett and his team’s guidance and investing philosophy. Owning shares of Berkshire Hathaway means owning a company led by one of the best investors ever — two if you include Charlie Munger.

And there are few things more critical to the long-term success of a business than the management team leading it. But it also raises an issue. Both Buffett and Munger are in their 90s. What happens when the company has to transition to the next era of leadership?

The person chosen to step up when that happens is Gregory Abel, who currently serves as the chairman of Berkshire Hathaway’s non-insurance operations and is the CEO of Berkshire Hathaway Energy. Abel has been at the company since 1999 and has presumably learned enough from Buffett to “keep the culture,” in the words of the Oracle of Omaha.

That is Buffett’s way of ensuring investors that Berkshire Hathaway has promising prospects with or without him at the helm. Most investors interested in Berkshire Hathaway will gravitate toward the class B shares, BRK.B. For one, Berkshire Hathaway’s original BRK.A stock — having provided amazing returns over decades — is substantially more expensive: Shares are currently changing hands for $461,300.

Meanwhile, the company’s class B shares are a much more affordable $305. That is one of the reasons why Buffett and his team introduced lower-priced shares: To give the average investor a chance to own the stock. And although class B shares have some downsides, including lower voting rights, the two are otherwise pretty similar, although Class A shares can be converted to class B, but not vice-versa.

For most investors, the Class B shares will be worth the lower price point over long periods. What’s more important than which class of shares one buys is that Berkshire Hathaway’s long-term future could look much like its past, and that is more than enough reason to purchase the conglomerate’s shares.