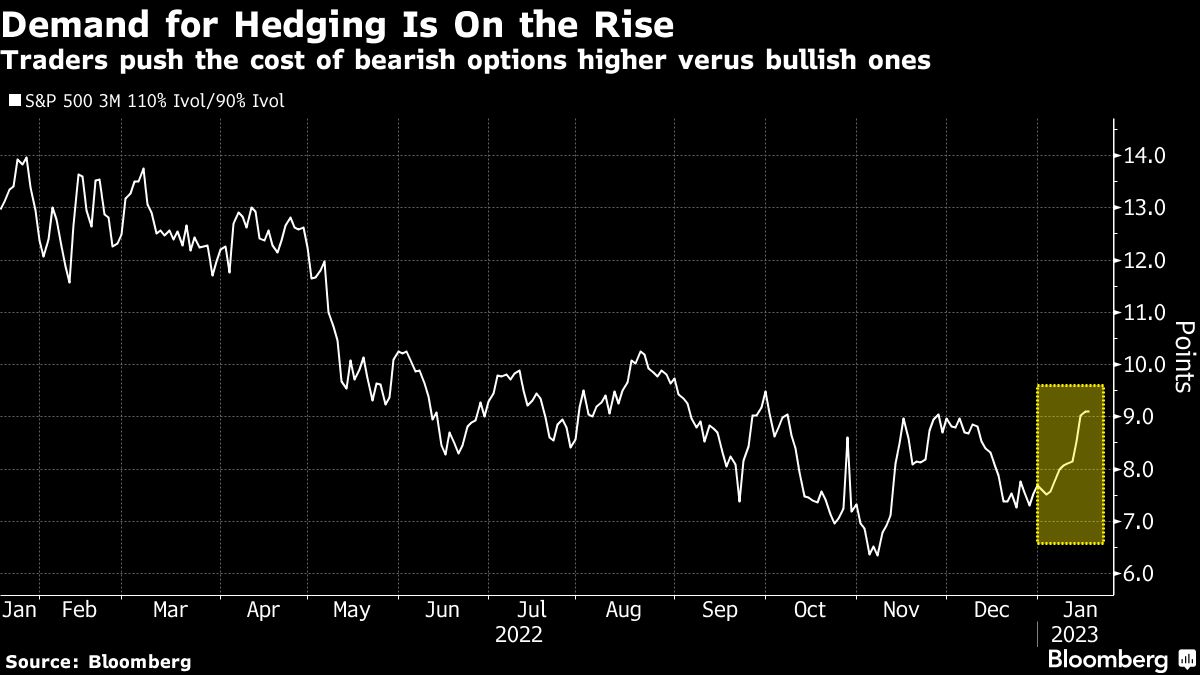 (Bloomberg) — Market watchers on Wall Street attribute this week’s stock selloff to the insidious threat of recession. Yet derivatives traders see a less ominous foe: the mass expiration of options on Friday — the biggest January event in a decade.

Sitting on the sidelines when the contracts roll over has proved a winning strategy of late. That includes this week with the S&P 500 falling for three straight sessions, the 12th time out of the past 14 months that the index has dropped around the time of OpEx.

Theories abound on why the event has proved consistently bearish. One is sheer coincidence, with the expiration happening to dovetail with the release of bad macro news. Indeed, Wednesday’s selloff worsened when data on retail sales and factory output rekindled growth concerns. Still, other experts see the options market exerting a big influence. The thinking goes that losses in stocks may reflect the unwinding of hedges by market makers, or traders using a liquidity window to sell stocks.

Either explanation could have been at work in halting a two-week rally sparked by optimism inflation will slow and the economy avoid a recession. Bulls burned by the latest downturn can take heart: Last year, stocks gained in the week after expiration on all but four occasions.

“This is actually a behavioral pattern that we have seen repeatedly. If anything, it removes one of the weakest weeks of the year,” said Layla Royer, a senior equity derivatives salesperson at Citadel Securities. “And history would tell you that you have a higher chance of rallying next week after expiry.”

Friday’s OpEx event will be a big one. Almost 180 million contacts are set to roll over, the highest for a January expiration in a decade, according to data compiled by Susquehanna International Group. Thanks in part to a surprise equity rally at the start of 2023 around a soft inflation print, open interest is leaning more bullish than a year ago, particularly among single stocks and exchange-traded funds, the firm’s data show.

That sets Friday up as another pivotal day, when holders of options tied to indexes and individual stocks will have to either roll over existing positions or start new ones. Given the process usually boosts trading volume, traders may have opted to take advantage of the opportunity to exit stocks during last year’s bear market, contributing to the pattern of OpEx weeks being bad for equities, according to Chris Murphy, co-head of derivatives strategy at Susquehanna.

With the recession debate heating up, investors are increasingly resorting to charts and technical forces for hints on market moves. Also cited among catalysts for the equity reversal this week are the resistance at the S&P 500’s 200-day average and a dip below 20 in the Cboe Volatility Index, a gauge of cost in options also known as the VIX.

The setup means traders may choose to gear up for protection on the downside heading into next month’s policy meeting by the Federal Open Market Committee, according to Brent Kochuba, founder of SpotGamma.

“So, we are running into OpEx with a heavy call position expiring in equities, and implied volatility a bit too oversold,” said Kochuba. “I think this places a damper on equities into the Feb 1 FOMC as traders reposition into some more long put exposure.”

Already demand for hedging is creeping up. The S&P 500’s skew, a measure of relative cost of puts versus calls, has risen in recent weeks — hitting a three-month high. That’s a departure from most of 2022, when skew kept falling in part because investors of all stripes had slashed their equity exposure during the bear run.

The spike in skew may be a sign that professional speculators are starting to add risky bets, a move that usually requires more hedging, according to Royer at Citadel.

“Going into this year, there certainly has been a little bit more of a reset in terms of people buying protection again,” she said. “There’s a little ratcheting up in net gross exposures that might be contributing to that. When insurance gets cheaper, you’re more apt to use the product.”