In presenting arguments for and against workflow management software company Atlassian (TEAM 3.32%), I’m not going to share anything I came up with. Rather, I offer a front-row seat to the current debate between a bearish analyst and Atlassian’s bullish management team.

David Trainer, CEO of research firm New Constructs, says Atlassian is a “zombie” stock that’s possibly headed to zero. Atlassian’s management has already clapped back, saying the business is on a 100-year corporate journey. This bull-versus-bear debate can be summarized in a single disagreement regarding cash flow. Here’s the debate and what it could mean for shareholders.

Does Atlassian really have a cash problem?

Trainer’s accurate past bearish predictions include calls on Carvana and Rivian Automotive. In December, Trainer took aim at Atlassian, according to Kiplinger, pointing to its negative cash flow and limited financial resources.

One of the profitability metrics Trainer looks at is Atlassian’s net operating profit after taxes (NOPAT). And to his point, Atlassian’s NOPAT has been negative more often than it’s been positive during its public history. Moreover, this metric absolutely nose-dived for the company in 2022. 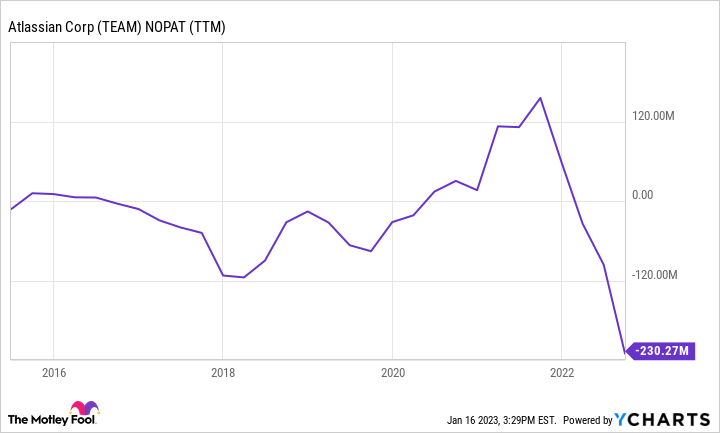 With “only” $1.5 billion of cash on the balance sheet, Atlassian can’t sustain losses of this magnitude indefinitely. But is Atlassian really a “zombie” company in danger of falling to zero as bearish Trainer suggests? Not so fast, says the company’s bullish management.

While Atlassian is profitless by certain metrics, it’s still free-cash-flow (FCF) generative — another measure of profitability. In fiscal 2022, the company had massive FCF of $764 million, which amounts to a 27% FCF margin. And in fiscal 2023’s Q1, it had $76 million for a 9% margin. This stands in stark contrast to Trainer’s past predictions with Rivian and Carvana, which both have negative FCF.

Where does stock-based compensation fit in?

The difference between Atlassian’s massive net losses and its robust FCF is mostly due to stock-based compensation. Rather than using cash, companies can issue shares and give those as part of their compensation packages. By spending stock instead of physical cash, the company improves its cash flow. Atlassian spent nearly $174 million in stock-based compensation in fiscal 2023’s Q1 alone — 21.5% of revenue.

You’ve probably been hearing about stock-based compensation more and more in the past year because tech stocks are generally down, and many tech companies liberally hand stock out to employees. But this discussion is much more complex than lazily criticizing a single line item on Atlassian’s cash-flow statement.

Atlassian is trying to build a 100-year company and envisions becoming a much bigger business than it is today. To do this, it’s aggressively hiring new workers. And it’s doing so all the more now that rival tech companies are laying off employees. Atlassian believes by staying on offense, it can recruit higher-quality talent and gain a competitive advantage.

Atlassian believes it can generate $10 billion in annual revenue within the next few years compared to just $2.8 billion in revenue in fiscal 2022.

If Atlassian actually can more than triple its revenue, it makes perfect sense for the company to aggressively hire people and preserve cash with stock-based compensation, even if operating profits — the metrics Trainer is looking at — are negative for the time being.

The problem for Atlassian shareholders today

This plan poses two potential problems for Atlassian and its shareholders. First, Atlassian’s rivals are taking the safer approach — many economists predict a slowdown in the economy in 2023, and that’s why many companies are initiating layoffs. Trying to expand the business at this time might not pan out in the near to medium term, leaving Atlassian with higher operating expenses and insufficient top-line gains.

Second, Atlassian will keep dishing out stock-based compensation for now, which is a drag on shareholder value. Therefore, to beat the stock market average over the next five years, Atlassian needs to not only grow but grow more than enough to compensate for its rising share count.

That said, Atlassian could successfully execute this plan. If it does, you’ll likely hear its name mentioned among the tech giants in the future. Therefore, there is certainly potential reward for those who own Atlassian stock — the bulls have good reason for their bullishness. But the bear arguments have merit as well.

Personally, the bear arguments currently outweigh the bulls, which is why I still wouldn’t buy Atlassian stock today.