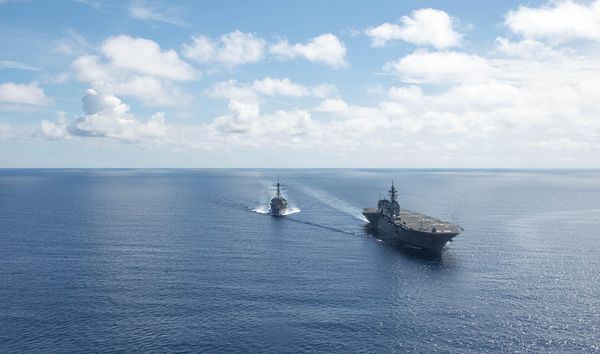 It was thus no coincidence that Beijing’s South China Sea island-building campaign began around the same time as China overtook the United States as the world’s largest trading nation. Meanwhile, unfair trade practices and military aggression in the South China Sea were the main accusations that U.S. Vice President Mike Pence made toward China in an unprecedented speech in early October. Thus, the intensifying trade war – initiated by U.S. President Donald Trump – is not a normal quarrel, but a shift from a “peaceful coexistence to a new form of confrontation” between the two global powers. Understanding the trade war in this light inevitably raises the question of how it will affect the South China Sea disputes.

The main channel of impact will be economics. An authoritarian regime like China depends mainly on socioeconomic performance for legitimacy. When the country endures economic hardship, it will be tempting for the leaders at Zhongnanhai to stir up nationalism to divert public dissatisfaction (for an example, look at Argentina’s decision to start the Falklands War in 1982).

Certainly, the trade war has just started and it is still uncertain what lies ahead. However, the Chinese economy has already suffered. In the third quarter of 2018, its GDP growth decreased to 6.5 percent – the lowest in a decade – and it could even go as low as 5 percent when facing the full effects of a trade slowdown. The pessimistic mood has even infected some of China’s biggest investors. Morgan Stanley, Nomura Holdings, Jefferies Group, and most recently JPMorgan have all cut down on their China-based holdings for fear of a full-blown trade war scenario. If this situation continues, it will be not surprising if Beijing chooses to play the nationalism card by taking a more aggressive stance in its maritime disputes.

Get briefed on the story of the week, and developing stories to watch across the Asia-Pacific.

This is tempting because China has the capability to do so. Beijing has invested a great deal to reinforce its military capability, particularly its naval force. A 2018 report by the U.S. Department of Defense reveals that China now possesses “the world’s largest and most capable maritime militia.” While the U.S. Navy has 282 deployable battle-force ships as of August 2018, the Chinese People’s Liberation Army Navy (PLAN) has “more than 300 surface combatants, submarines, amphibious ships, patrol craft, and specialized types,” making it the largest navy force in the Indo-Pacific region. According to Professor Robert S. Ross at Harvard University, had a naval war between China and the United States happened 10 years ago, America would have won easily. However, if it happened now, the war would be long, painful, and detrimental to both parties.

That explains why China has been confident on its bullish stance in the South China Sea since the start of the trade war. In addition to the heated exchanges between the two countries, last month, a Chinese destroyer challenged a U.S. destroyer when it maneuvered in the waters close to one of China’s artificial islands.

The risk of conflict escalates as the United States under Trump shows no hesitation to challenge China’s position directly. His top diplomat, Secretary of State Mike Pompeo, has threatened to oppose China at every turn. In recent years, the United States has boosted its military presence in South China Sea too, through “freedom of navigation” operations. Recently, it widened the scope of this patrol to the air, when a U.S. P-8A Poseidon flew past four artificial islands built by China in August, ignoring the Chinese military’s constant warnings. The United States even encourages its allies to do the same, with France and the U.K. taking the call.

Trump’s Indo-Pacific strategy can be seen as a counter-balancing act against China’s Belt Road Initiative, and Washington is also engaging the Quad coalition to check Beijing’s maritime ambition. Vietnam – a former enemy but now a U.S. strategic partner – is now able to buy U.S. weapons as the embargo was lifted in 2016. Vietnam is seen as the most defiant claimant state in the South China Sea disputes with China.

Trump’s hawkish stance, set within Washington’s hardening narrative of conflict with China, will be unlikely to wither as the trade war intensifies. His Chinese counterpart, President Xi Jinping, will not back off either. Being regarded as the most powerful leader since Deng Xiaoping, Xi doesn’t want to look weak in front of the domestic audience. He recently told the military region that monitors the South China Sea and Taiwan to “prepare for war,” in an attempt to reiterate Beijing’s territorial claims. Although the chance of war is tiny, it cannot be excluded.

For other South China Sea claimants, such as Vietnam and Philippines, this complex and intertwined situation of superpower struggle has mixed implications. In terms of economics, the trade dispute between the United States and China could in fact benefit Southeast Asian countries, as many of their products are Chinese competitors. In the absence of cheap Chinese goods, ASEAN products can be ideal substitutes. In addition, foreign investment might shift to ASEAN to avoid higher tariffs, a move which is often dubbed as the “China plus One” strategy. A potential negative impact would be the possibility of Chinese consumer goods flooding into Southeast Asian domestic markets, threatening local producers’ survival, especially in sectors dealing with textiles and garments, mechanical engineering, steel, and building materials.

But in terms of an escalating maritime dispute, it comes at everyone’s expense. Southeast Asian countries want a predictable and rule-based order in the South China Sea, not increasing militarization and destabilization. For their own benefit, the active U.S. involvement in the region should aim at keeping Beijing’s actions in check, and making China a responsible stakeholder, rather than fueling aggressive Chinese nationalism, which risks turning the whole region into Asia’s cauldron.

Being militarily and economically overwhelmed by China, Southeast Asian claimants cannot afford to compete with Beijing in a more confrontational scenario. A nationalist and wounded China, faced with the economic consequences of the trade war, will be a dangerous prospect for the South China Sea.

Trinh Le graduated from The University of Melbourne with a Master of Publishing and Communications in 2016. During his study, he worked as a volunteer reporter for Meld Magazine.