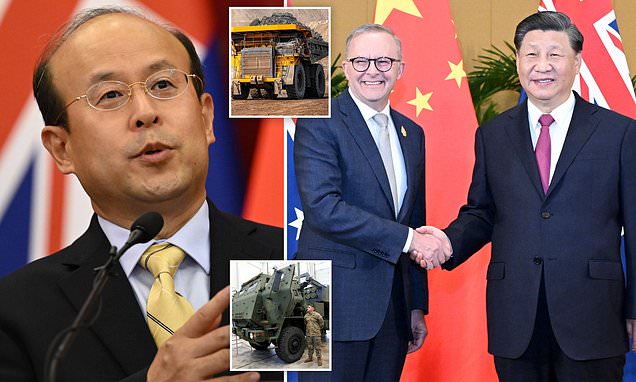 China has sent a chilling threat to Australia that the AUKUS nuclear submarines and HIMARS missiles deals could come at the cost of the thawing trade war rift.

Relations between China and Australia have been steadily improving under the Anthony Albanese government, which has eased some trade barriers.

Four Chinese power companies will now be allowed to buy Australian coal again from April 1, and there are hopes the barley, wine and lobster bans will also be lifted.

But China’s ambassador to Australia, Xiao Qian, has warned it could all come crashing down with a devastating effect on local jobs if Australia persists with the US military deals.

Diplomatic ties with China have warmed through the work of foreign minister Penny Wong and a meeting between PM Anthony Albanese and Chinese president Xi Jinping.

It contrasts with the stand off under Scott Morrison which saw China impose punishing tariffs on Australian goods in 2020 which hit Aussie companies hard, cutting off the nation’s number one trading partner in some key markets.

China is now said to be trying to meet Australia midway and has reportedly offered to drop the trade war if Australia withdraws its complaints to the World Trade Organisation about the bans.

But that offer now appears to be subject to Chinese concerns over Australia’s military upgrades through the planned $70billion nuclear submarine fleet and a $558million deal to buy the HIMARS missile launchers.

An influential government-run Chinese newspaper this week warned Australia to back off or face dire consequences.

‘We still have reservations about lifting the sanctions against Australia,’ said an editorial in China’s Defence Times.

‘Although China and Australia have resumed dialogue, the Australian government has not shown the full sincerity we want to see in really wanting to improve relations.

‘On the contrary, it has become more and more cooperative [with the US] at the military level. The US wants to contain China’s ambitions in the Asia-Pacific region.

‘The US always wants to deploy rockets, bombers and other armaments in Australia.

The government mouthpiece said the deal could cost any peace pact in the tense trade war.

It raises concerns the new missile system – which has been showcased effectively in Ukraine’s war against Russia – gives Australia ‘unprecedented long-range strike capabilities.’

‘This is also part of the US military plan in Australia,’ it added. ‘The Australian government’s move just caters to the American mind.

‘The Ministry of Foreign Affairs has emphasised many times that this move by the US will aggravate regional tensions, trigger a regional arms race, and be detrimental to regional peace and stability.’

‘So which country is the US military plan in Australia coming from? There is no need to say more, everyone knows it in their hearts.’

Ambassador Xiao insisted the outlook was still optimistic and hailed the coming new Chinese year of the rabbit as a chance to leap ‘over obstacles and come into good luck.’

He said the attitude in Australia had ‘turned around from falling behind to stability, and from stability perhaps to improvement and even development’.

He added: ‘I would hope that as we are improving our relations, we will have more encouragement to Chinese companies to come back [to buying from Australia].’

But Dr Alex Bristow of the Australian Strategic Policy Institute warned Nine News: ‘This isn’t meeting in the middle.

‘This is China reversing course, recognising that its policy of coercion, its attempt to get Australia to change its ways has failed.

‘There’s a good reason why Australia is strengthening its defence partnership with the United States and with other allies.

‘It’s because we do have concerns about China’s ambitions.’